This is a prelude to a series of posts I plan to write on the academic job search and things I learnt during the process, about looking for a(n) (academic) job, about myself and about Interviewing in general. I was on the academic job market in Spring 2014. I am grateful to have landed a position, after which I decided to defer by a year to wrap up some of my post-doc work and to work on my own company with a colleague and my thesis advisor.

As I am on the eve of officially starting my position, I have been thinking a lot about why I picked Harvard SEAS, and what I was able to accomplish this past year. This post is going to focus on one seldomly-discussed aspect of the interviewing process, that I believe was tremendously helpful to me. I'll write later about some of the really cool things I did during the year before starting the position. A little bit of background is in order. At the time of applying, I had been a post-doc for 3 years, and a well-seasoned veteran of the industry job search. I had applied and interviewed for everything from positions in finance, on Wall Street (all my friends were doing in it, I was weak and followed, forgive me), to positions in Software Engineering and Data Science. My batting average, I am afraid, was 2/30: I had applied to 30 positions roughly, was flown out to 4 or 5, and got 2 offers. A few things to note. First, 2/30 can seem depressing (and it was), especially from an over-achiever such as myself. Second, the number 2/30 does not reflect the sequence in which those 2 wins came. 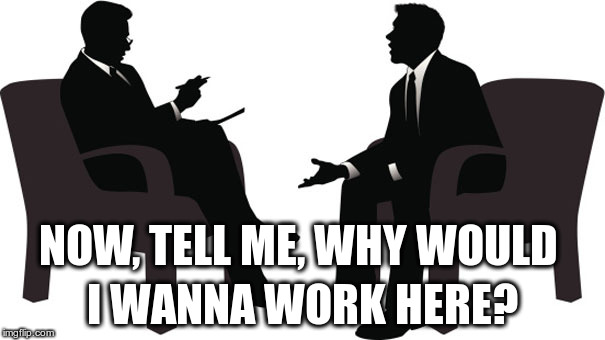 The 2 wins came after I had an epiphany about the 'Interviewing Process', one that had taken me a long time to figure out, because my immigrant, slightly-entitled, stuck-on-a-visa-for-the-past-10-years-despite-my-MIT-credentials self, was projecting the type of body language that, during an interview, screams: this dude is pretty much begging for a job, he does not seem to know what he wants, why would we hire him? What I realized after a string of disappointing, stay-in-your-room-and-brood losses (first-world problems), was that, you are interviewing them too, Demba, as much as they are interviewing you. Before I dig deeper, let me just say that I realize that one may think that there is a certain amount of privilege in this statement. So, let me check my academic privilege. Yes, I have a PhD from MIT. No, by you are interviewing them too, Demba, as much as they are interviewing you I do not mean that I am entitled to any job simply because of my credentials. That would be absurd. You see, the credentials, and most of my grad school friends I have spoken about this with agree, will get your resume somewhere near the top of the pile, but you better make sure you show up damn well-prepared if you wanna take that job, homie. Also, as I said above, I had been on a visa for a while at the time. The thing with being on a visa is that it limits your options and literally robs you of your creative impulses. I am convinced 90% that the I-am-begging-you-for-a-job state of mind that I had started the string of interviews came from this. The feeling of being trapped, of not having any options (I'll touch on this in another post, but immigration reform is important I think, to empower a generation of entrepreneurs who we otherwise rob of their potential). So, no, you are interviewing them too, Demba, as much as they are interviewing you does not come from a place of privilege. What I realized is that, as soon as I adopted this mode of thinking, my body language changed dramatically and, as someone who has been an interviewer, I know very well that body language, demeanor, is something that is easy to pick on. The lack of healthy body language (I am not talking about nervousness) can be a read light to any employer that has invited you to interview (and is therefore considering you as a serious contender for a position). I was still nervous all right, I still felt that my options were limited, but this change in perspective had a number of cognitive effects that went a long way. I started thinking of the interviews as having fun, and actually started having fun during them. I was more inquisitive about places where I interviewed, and started thinking not only about the job, but about how my aspirations/ambitions fit within the culture of the company where I interviewed. And this showed. I started getting the wins. Rejections, after I changed my take on interviewing, did not sting as much as before. I ended up turning down an education start-up that I was very excited about (joining a start-up is way too risky when you are on a visa), and a major Software Engineering company who wanted to turn me into a coder and who I tried to convince to get me a position that involved a research aspect but refused. Their loss.

Which brings me to the academic job search and my experience. By this time, despite having been been battered by the industry job search, I had a healthy sense of what I was looking for in a position, and had the body language that went with it. I was looking for something researchy, an interdisciplinary environment that could keep me interested and on my toes, a not-too-small and not-too-big place with dynamic colleagues. A start-up environment wrapped in velvet academic cloth: Harvard SEAS! I am sure SEAS is much more! But this is the best image I can come up with after a long and exciting first day of orientation! I don't think I could/would have appreciated SEAS as much had it not been for my giving industry ago and the string of what looked like failures but were actually near wins and ended up preparing me for this big win. Sarah Lewis has very nice book titled The Rise. The book is loosely about how, at times, we perceive the culmination of our efforts that do not lead to the outcome we desire as failures, but that these are actually near-wins (the sprinter who gets Sliver rather than Gold) that force us to surpass ourselves the next time in ways we might not otherwise if it were it not for the 'near' in 'near-win'. P.S.: She is a Harvard alum. It's a good read. I found it terse at times. It is full of references to works of literature I have not read and that the author uses to hammer in some points (and to facts I should have known: what was Samuel Morse's occupation prior to his inventing the telegraph?). You should check out her Ted Talk!

This concept of near-win is of utmost importance in academia where we encounter failure (near-wins) more often than not, and must figure out how to pick up our selves and march on. I plan to write a post about failure in the near future, as well as a few posts about my experience interviewing for academic positions!